Award-winning printmaker Vincent Sheridan was born in County Kildare and studied at the Dublin Institute of Technology and the National College of Art and Design, Dublin. He has worked as a full-time artist for over 20 years. He has traveled extensively and spent time in the Canadian High Arctic. For part of 1991 he was artist-in-residence at the West Baffin Eskimo Co-operative, Cape Dorset, Birds (especially crows and starlings) continue to feature largely in Sheridan’s work. He is concerned with the social behaviour, flight dynamics and subliminal ‘brushstroke’ patterns of birds in flight. His images often mirror human group dynamics, modes of communication and social interactions.

Vincent Sheridan has had solo and group exhibitions in Ireland and Canada.. His work was part of the very successful Holy Show at the Chester Beatty Library, Dublin and is in several collections in Canada and Ireland, as well as Peru and Japan. He lives in Dublin. In 2008 Sheridan completed a MA in DIT Dublin. 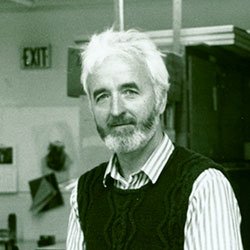